This petition was on a table by the doorway at a Starbucks near my house, during the recent government shutdown threats, and the top sheet had even collected a lot of signatures. I wonder what those people thought they were accomplishing. You can click on the photo to get an enlarged version, but here’s what the text says:

To our leaders in Washington DC,
now is the time to come together to:

It’s as though Starbucks CEO Howard Schultz hears someone getting mugged outside his window and shouts “Hey you all down there, quit fighting!” 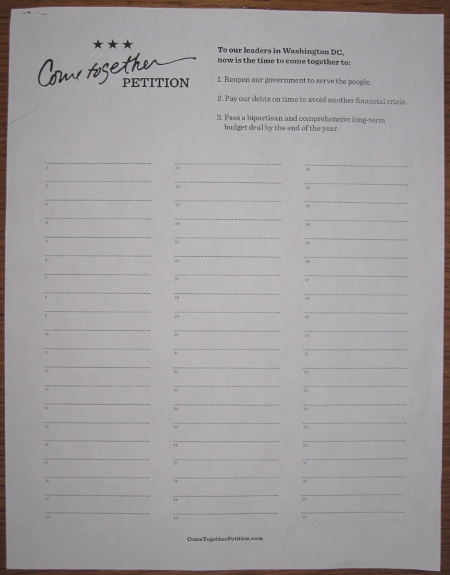 Memo to Starbucks: the way to solve this crisis is by taking a side. It’s literally true: as their poll numbers have dropped (i.e., as more people have taken sides), the Republicans have started to abandon their demands. When enough of them abandon enough of their hostage-taking ways, the government will re-open, the debt ceiling will be raised, and conversation will be possible. Humiliating defeat is also a bipartisan solution.

If you’re a gigantic publicly-held company and don’t feel you can afford to take a side, then at least don’t put out pointless petitions in favor of unicorns and rainbows and everbody getting along. That’s worse than useless. You might confuse some poor person who hasn’t yet had their morning coffee into thinking they’re actually participating in politics when all they’re doing is donating their name to your misguided and implicitly partisan publicity drive.

Refusal to take a side almost always equals taking one side. In this case, by legitimizing the Republicans’ extortionary tactics, Starbucks is supporting their side. All the people signing that petition are doing so too, but — especially knowing the demographics of Hyde Park, Chicago, where that particular Starbucks is located — they probably don’t think of themselves as doing that. That what makes this worse than useless.

I’m not sure how one conspicuously refuses to sign a petition. Maybe cross out one line? Sign your name and then cross over it? What I did at that Starbucks was write a note at the top of the petition about “false equivalency” and how the only constructive action to take here is to take a side. If you stop by a Starbucks today, please do the same :-). Arrgh, I wish I could go to this!

Eben Moglen is giving a series of talks entitled “Snowden and the Future” on four Wednesday nights, spread across October, November, and December. I’d even fly into New York to attend some of them, but I have choir rehearsal on Wednesday nights (and I’ve already missed rehearsals due to travel, so don’t want to do more of that).

But if you’re in New York, you should go! They’ll be at Columbia Law School, Jerome Greene Hall room 101 (map), from 4:30pm – 5:30pm, on Wednesdays Oct 9th, Oct 30th, Nov 13th, and Dec 4th. More information at snowdenandthefuture.info. The talks will be live-streamed at that site too.