I gave my friend Noel Taylor (yes, the noted William Howard Taft scholar) a book as a New Year’s gift.

This was his response. 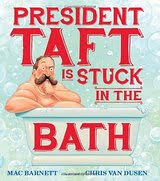 by Mac Barnett, I delighted over what I assumed would be a scholarly and well researched work that would share new insights into the life of one of our most misunderstood presidents. Lamentably, having now read the book cover to cover several times (an enterprise of only two to three minutes’ time) I have come to the unfortunate conclusion that historically speaking, Barnett is on very shaky ground. Although he notes correctly that Taft was our nation’s 27th president and accurately reports the first names of Taft’s wife and some of his cabinet members, most of the book is taken up with a graphic (literally!) realization of what is nearly universally regarded as an apocryphal tale.

I suppose the title should have given the game away, but I admit I expected more from Mr. Barnett, whose previous works such as “Billy Twitters and His Blue Whale Problem” 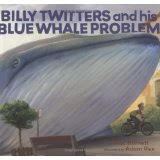 seem substantially more grounded in fact than this latest work. As it stands, this purported history of a widely discredited story comes across at best as a children’s fairy tale, and at worst as a character assassination of the lowest order.

The real kicker though, is that despite all of these obvious shortcomings, Mr. Barnett has once again, and at the eleventh hour, managed to spirit away from me that recognition which I have chased in futility for over 20 years now. Namely, with “President Taft Is Stuck in the Bath”, Mr. Barnett has won the Bancroft Prize!

So I ask, just who the hell do I have to blow to get a Bancroft Prize in American History?

Rants.org is grateful to Prof. Taylor for permission to reprint his review here.

An interesting bill was just introduced in the New York State Senate: open.nysenate.gov/legislation/bill/S161-2015

AN ACT to amend the tax law, in relation to providing a tax credit to individuals for up to two hundred dollars of expenses related to the development and posting of an open source or free license program …

It’s good that it specifically cites the Open Source Initiative and the Free Software Foundation as arbiters of what constitutes an “open source or free license program”. Here’s the full text:

(I didn’t know New York did this stuff in ALL CAPS — I guess that makes it official!)