Got this by email yesterday:

I guess all that work is finally paying off!

This post is for people who use Redmine; others are welcome to stay for the ride if they wish.

I’m writing this post mainly so it will turn up in results when people do a web search to find out how to edit multiple issues at once in Redmine (e.g., search://redmine batch edit multiple issues/). I recently did that search, to no avail, and was stumped until someone gave me the answer in IRC.

It turns out the feature is there, a bit hard to find, and more powerful than I expected. Here’s the email I sent to my colleagues about it (lightly edited). I’m too lazy to even make screenshots, but the prose recipe should suffice:

kfogel: :), nice one… btw: you can also multi-select by clicking anywhere on the issueline (not in inside links) combined with browser-dependent key. Most are ctrl-leftclick. I remember Opera being alt-rightclick (at least in the past, i remember reading something about changing it not so long a ago). 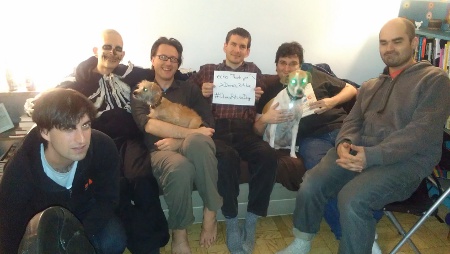 Happy Dennis Ritchie Day! (It’s the day before Halloween, so we decided to leave the spooky dog in the picture.) Here’s the close up: 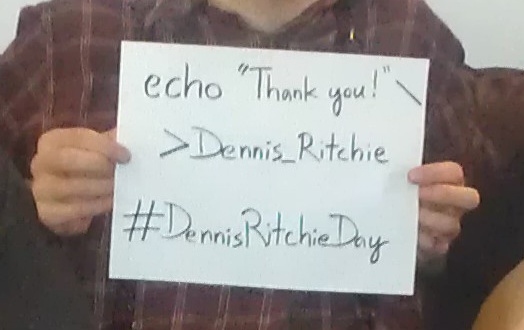 If you don’t know who Dennis Ritchie was, or why he has a day, this post by Tim O’Reilly is a good place to start.

Ritchie, who died this October 12th, was a pioneering computer programmer who had an exceptionally good sense of taste and an instinct for where to invest it. Collaborating with colleagues (something his career was notable for), he designed long-lasting systems that programmers could get things done in. He helped create both the Unix operating system — which, depending on how you look at it, either is or is inside today’s GNU/Linux, FreeBSD, Macintosh OS X, and many other environments that you probably interact with all the time — and the C programming language, which is still the lingua franca for systems programming more than thirty years after its first release.

There are many, many other such tributes to be found on the Net today. Some of us are using the hashtag #DennisRitchieDay on identi.ca and Twitter to mark the occasion.

Unix was the first operating system I really learned, and it’s what I’ve been using ever since (Debian GNU/Linux now, after various other Linux distributions starting from 1992). C was my first programming language. My copy of Kernighan and Ritchie’s “The C Programming Language” (always called simply “K&R” among programmers) is probably the most well-thumbed book I own, and looks it. I can’t really imagine what the computing universe would be like without Ritchie.

Now that I have your attention… 🙂

Recently a friend posted to a mailing list about Yet Another Cold Fusion Experiment whose results will soon be in. Unlike most people, my worry is not that these experiments will all fail, but rather that one will succeed.

That line surely exists; the only question is how close we are to it. My thesis is that, wherever we are now in relation to that line, the development of cheap cold fusion brings us dramatically closer to it.

One of the nice properties of expensive energy is that you know who to watch. Only states and other really big actors can afford, say, nuclear weapons, so all the other states and big actors can watch each other and make a move if someone starts going over the edge.

(Note you rarely see someone get very close to the edge, because they know what would happen if they did.)

But if energy is cheap, there are too many people to watch. Thus I think it’s possible that cheap energy implies a surveillance society.

Sorry to be so grim. If I’m missing a way out, please comment. But right now, the risks of cheap energy look to me much greater than the benefits. (Perhaps it’s important to distinguish between energy that can be “surged” and energy that is cheap but can only come in at a certain maximum rate? That might help; I don’t know.) 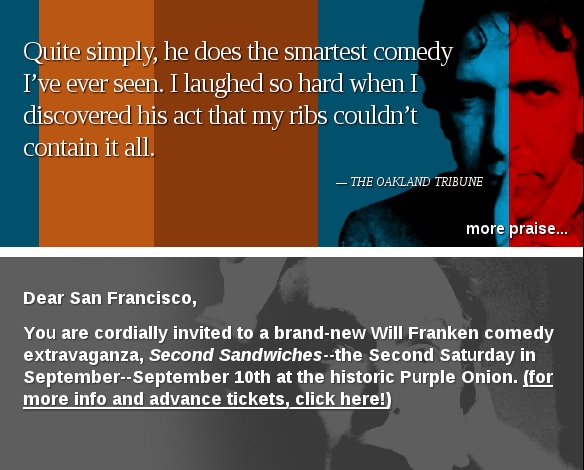 Will Franken, this Saturday, September 10th, at the Purple Onion in San Francisco, at 8pm.

You already know how I feel about Will Franken. His shows are not to be missed. If I were in San Francisco right now, I wouldn’t be writing this blog post — I’d be buying tickets.

Update 2011-07-21:I’m leaving the original post unchanged below, for reference, but I just got an email from Jon Trowbridge saying he gets different search results with “Google” and “Google+”. I do too, but not in the way I would expect, at least for more complex searches. When I first try the search I want, Google suggests just eliminating the term “google+” from the search string entirely: 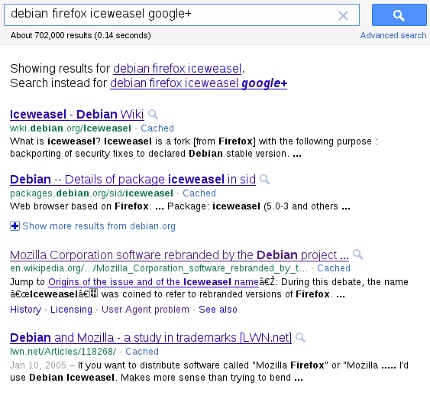 (But that could be because the word “google” is itself treated specially, perhaps because people often needlessly type it in searches? I don’t know; only someone with access to the logs can say for sure.)

Anyway, once I choose the real search…

…this blog post comes up at the top, but no other result on the front page contains the character “+” nor the string “plus”, let alone “google+” or “googleplus”: 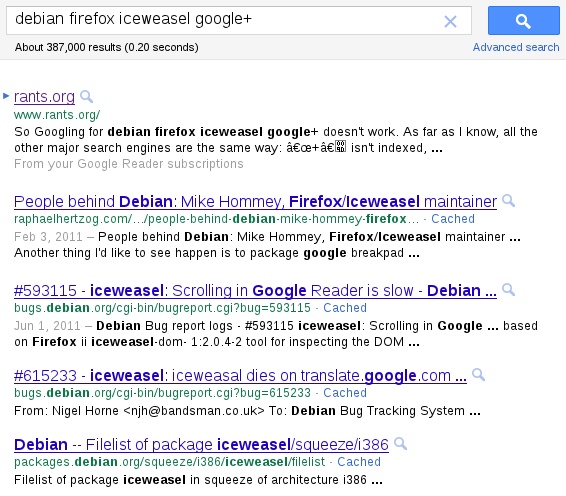 This screenshot doesn’t show the results below the fold, but I did an in-page search to make sure. I also searched within the second and third hits (i.e., the first two after my own blog post) and they don’t mention “google+” or “googleplus” or anything similar either.

Why is it finding this blog post so accurately and yet nothing else on the same topic? Surely I can’t be the only person mentioning about Debian, Firefox, Iceweasel, and Google+ in the same article. Even if no one else has this browser-compatibility problem (which seems unlikely anyway), I’d expect people writing for other reasons.

But if I do the same thing but just comparing the terms “google” and “google+” as Jon did, without all the other stuff, I get a fair number of results that are clearly about Google+ — well, actually, it’s all about Google+ and the iPhone, but I guess that just shows what’s important on the Internet these days.

That makes me think that it’s not simply the case that when Jon and I add the “+”, we’re getting the old “match this exact string” behavior (which could still lead to different results for the two terms, because Google might treat various misspellings of its name as synonyms). Google really could be indexing “+” signs now, or (more likely?) at least treating “google+” specially when the crawler encounters it.

Color me baffled. Anyone know what’s really going on here?

(The “Learn More” link above goes to a non-existent page, by the way, so that doesn’t help.)

Note how it lists Firefox as one of the browsers to try instead. The thing is, I’m running Firefox already!

I have a tentative theory. For complicated reasons, the operating system I run, Debian GNU/Linux, repackages Mozilla Firefox under the name “Iceweasel”: 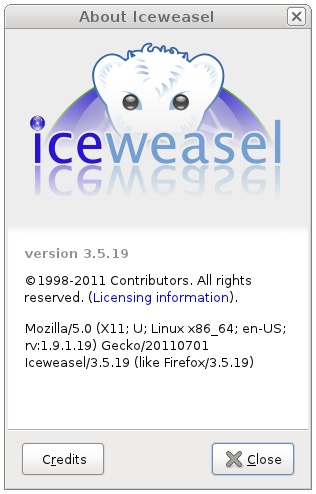 When identifying itself to web servers, the browser transmits something like this:

The server on the other end could interpret that in a number of ways. It could decide to treat its interlocutor like Firefox 3.5.19… or it could decide the browser is some mysterious beast called Iceweasel, and refuse to serve to it. No doubt somewhere there’s an RFC that spells out what both sides should do, but I have no idea which one if so.

Anyway, I don’t know for sure if this is why Google+ is rejecting my requests. I may test the theory by having my browser impersonate regular Firefox, after I finish this blog post. At the moment, all I know is “It’s Not Working”.

But the worst part is: I can’t Google up an answer, because “+” doesn’t work in Google searches.

You can’t do a Google search based on the presence or absence of a “+” sign. You might get results that contain “+”, of course, but the matching will have been based on the alphanumeric words around it, not on the “+” sign itself. (Google even turns the fact that they don’t index “+” to advantage, offering it as a metacharacter in search strings for suppression of the automated synonym matching that would otherwise happen automatically).

So Googling for debian firefox iceweasel google+ doesn’t work. As far as I know, all the other major search engines are the same way: “+” isn’t indexed, so you can’t search for it. Fine. The reasons for this are technical, having to do with size-versus-completeness tradeoffs in building search indexes.

But then I wish they hadn’t named an important new service in such a way that it can’t be searched for :-).

Update: using “googleplus” as a synonm gets some useful results, I guess because people are sometimes using that spelling when writing for the web. I wonder if that’s because they’re aware of this problem. Of course, people sometimes spell it with a space and sometimes without, which means if you use an actual “+” with your search for “googleplus”, you’ll miss half the results. It’s the irony that keeps on ironing.

I just got back from a wonderful three-week vacation in China. The trip did, however, further my worry as a patriotic American that the Chinese are rapidly overtaking us — not just in industrial technologies and renewable energy production and the like, but even in the service economy areas where we might hitherto have presumed ourselves to still retain some advantage. For example, read carefully what’s on offer at the Fu Run Hotel in Xi’an: 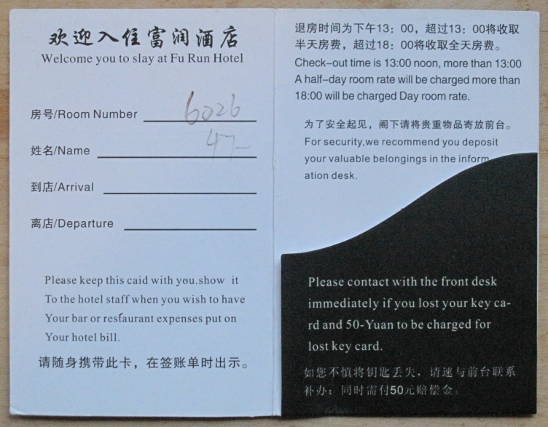 Like I said, I had a great visit! Some of the other guests in the hotel didn’t have such a great visit, though.

☺ I’ll try to write a real post about my trip later, with some photos. But that was the single best Chinglish I have ever encountered, and I just couldn’t resist posting about it. In fairness, it’s no worse than some of the Chinese phrases we wear on t-shirts in America… well, okay, maybe only a little bit worse.

Why you should be reading more of Ben Collins-Sussman:

I usually find it easier to encode my home videos into the immutable portion of some custom-fabricated DNA, which I then implant into bacteria and launch into the stars. I figure that in billions of years, they may evolve into sentient life forms, examine their DNA, decipher the codec, then watch my children play ball. Gotta make the important memories last. 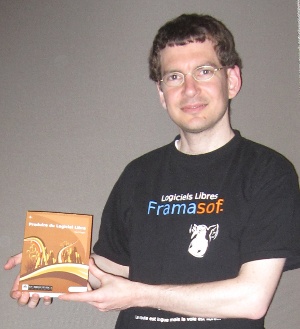 The folks at Framabook graciously sent me some copies of the print version of their French translation of my book (in French, “Produire Logiciels Libres“, in English, “Producing Open Source Software“). They also sent some questions for an online interview to accompany the release, and Olivier Rosseler translated my responses.

The French version of the interview is now up at www.framablog.org/index.php/post/2011/04/10/karl-fogel-interview. I’m posting the English original here, and thank them very much for asking such provocative questions. 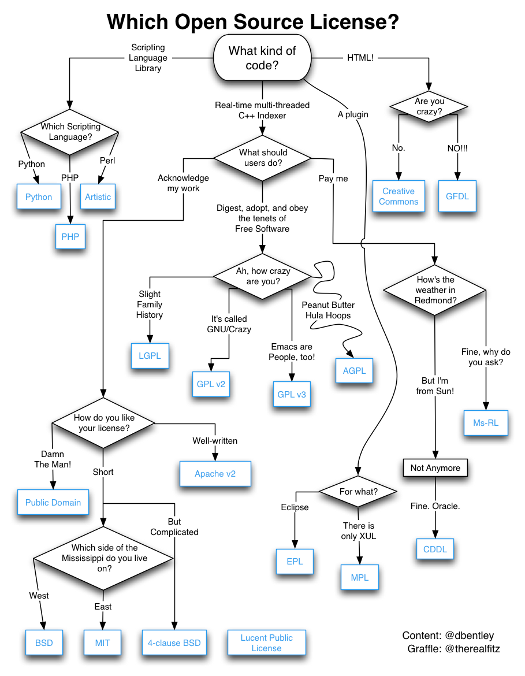