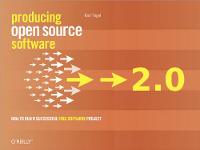 My Kickstarter campaign to update my book Producing Open Source Software has passed the funding threshold — thank you, backers! — and now is going into overfunding.

This is great news, and is what I’d hoped (though not anticipated). I’d like to spend as much time as I can on the revisions, so am trying to push the overfunding as far as it will go. As I wrote on the Kickstarter project page:

The amount I’ve set as the threshold is enough to make all the important updates I’m aware of right now, but things don’t need to stop there. If this project gets overfunded, that’s even better: that would allow me to spend even more time improving the book, including doing more research (e.g., talking to people in more open source projects, companies, etc), having more colleagues review the work-in-progress & incorporating their feedback, improving site infrastructure to better automate the ebook builds, improving the translation infrastructure, etc. More money == better book and better access, basically. I’ll be doing my work in a publicly visible repository, so anyone can stop by and see what’s going on at any time. Patches welcome, of course.

There are 9 days left in the campaign now! Please tweet, dent, Facebookify, blog, Google Plusificate, Tumblrize, and do whatever other Internet social networking verbs are appropriate to help spread the word.

The above, plus I will dedicate one of the book’s version control commits to you, or to the project, person, or organization you designate. Note that all the book’s vc checkins go into a publicly visible repository. (This reward is new — I added it after the campaign had been running for 20 days. Many thanks to Michael Bernstein for thinking of the idea!)

Many, many thanks to all the backers so far. One of the nicest things about this campaign has been seeing many so familiar names from the open source world pledging to the campaign. (Don’t get me wrong, though: I appreciate the donations from people I don’t know, too! I assume most of you are readers of the first edition, and your pledges are the best evidence I could have asked for that the book has been useful.)

Scott Berkun and Gervase Markham both not only pledged, but wrote very kind blog posts about the book and this Kickstarter campaign; I’m pretty sure those posts are responsible for spikes I saw in the pledge rate right when they came out. (And just as I was writing this I saw Duncan Davidson did the same; thank you! Am I leaving anyone out? Don’t be shy; if you posted about the campaign, I’d love to know about it…)

Then just a couple of days ago, Michael Bernstein did an amazing mini-campaign of support. First he posted on Google+ about it, then shared it widely among well-chosen circles (there was a spike in donations then, with many coming from plus.url.google.com, so it seems pretty clear it was due to his post). Then, after tweeting it, he wrote me a detailed email with instructions for how to succeed in the overfunding phase, including concrete strategies and some excellent & creative ideas for adding rewards and stretch goals — advice that I am taking (as you can see from the new reward above). Basically, as far as I can tell, for a day he made this campaign his own, and that’s going to make a big difference. Michael, thank you.

For reference, my blog post about launching the campaign is here, though you might want to just use the campaign page itself for postings.

Thank you, backers & friends! It’s made my month to see how large the intersection of those two sets is.