An old tradition holds that the location of the discoloration in the marble of the Washington Monument prefigures the end of the Republic: 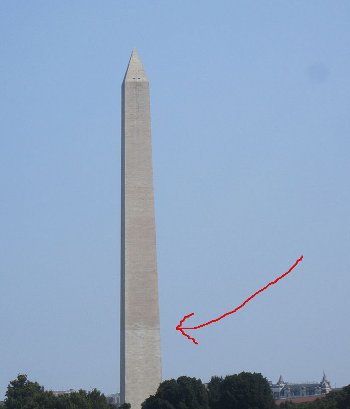 The discoloration represents the division between the two phases of the Monument’s construction. The phases used marble from different quarries, resulting in a clear visual boundary. The pause between the phases lasted nearly two decades, from 1858 to 1876, and although the original reasons for it are complicated, it was drastically lengthened and nearly made permanent by the Civil War. We may take the discoloration as representing the Civil War, forever the spiritual halfway point in the United States’ history.

So it looks like we’ll make it to sometime between 2089 and 2104. We had a pretty good run. Maybe someone else will find a use for our Constitution, especially since it’ll be in such good condition. (“Like new! The previous owners barely took it out — it just sat in the garage for the last few years, really.”)

The construction of the Monument is itself is a fascinating story. It turns out that our national weakness of historical amnesia is sometimes a blessing. Then too, it could be said that every nation’s weakness, and blessing, is historical amnesia.

2 Comments on "Are you a Monumentalist?"